English Martyrs:The title poem of Conor Carville‚Äôs second collection takes off from a London church and its congregation, but pushes on out into planetary, even cosmic dimensions. In another poem, the head of the Blessed Oliver Plunkett appears in the TV room of a London mental hospital, to tell the strange story of a mass on Clapham Common in 1984, when the London-Irish assembled to celebrate his beatification. These poems, and many others here, reassert the capacity of song to grasp the shape of a life, a community, or a world, in the shadow of its vast disorder. Sometimes lyric, sometimes violent, this is a book that teems with the martyrdoms, both everyday and epic, that punctuate our lives.

Conor Carville is a poet and critic from Armagh, N. Ireland. His first collection, Harm‚Äôs Way, was published by Dedalus Press. He lives in South London with his wife and daughter. 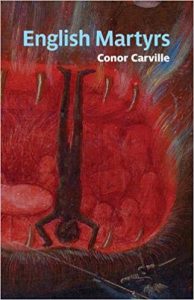 Reaction Time of Glass:
This carefully meditated debut explores the imagination’s material legacy, how our ideas have entered wood and stone, celluloid and skin, metal and glass, and become restless in the process.

Reaction Time of Glass is a work of unusual clarity and coherence. Like the cityscapes it contains, it is home to interiors – eerie or homely, dark as well as light – akin to those we‚Äôve inherited and inside of which we perform our lives.

James Peake has worked in trade publishing for several years, predominantly for Penguin Random House and Pan Macmillan, as well as leading independents and literary agencies. His poems have appeared in numerous anthologies and magazines including The Next Review, The Best New British & Irish Poets 2017, Scintilla and Wild Court. ‘Reaction Time of Glass’ is his debut collection. 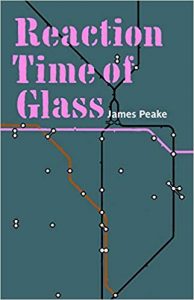