Celebrating in New York, Edinburgh and Vout-O-Reenees London. The Transatlantic poetry magazine parties with readings from Wendy Cope, ¬ÝNiall Campbell, Kei Miller,¬ÝClaire Pollard. Come and join us with this stellar line up of poetry and music. Members as usual FREE but if you want to bring guests please book tickets. 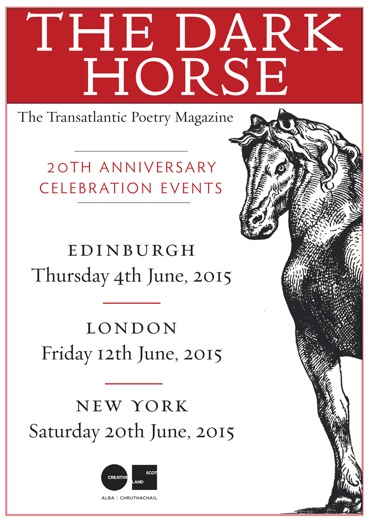 WENDY COPE
since her bestselling debut Making Cocoa for Kingsley Amis was published in 1986 (around 200,000 copies to date), Wendy Cope has been responsible for some of the best-known and most-quoted lines in contemporary poetry. Her subsequent collections confirmed her reputation as a classic English humorist whilst also allowing room for poems of a more meditative tone. She received an OBE in 2010, has edited several poetry anthologies and her poems for children are widely published.

CLARE POLLARD’s
fourth collection of poetry, Changeling (Bloodaxe,2011) is a Poetry Book Society Recommendation, and her latest book is a new translation of Ovid’s Heroines (Bloodaxe, 2013). Her play The Weather debuted at the Royal Court Theatre, and her radio documentary My Male Muse was a Radio 4 Pick of the Year. Clare lives in South London with her husband and son, and blogs regularly about life as a poet at clarepollard.com

KEI MILLER
burst onto the poetry scene with his 2006 debut Kingdom of Empty Bellies. Miller was born in Jamaica in 1978 and read English at the University of the West Indies, before completing an MA at Manchester Metropolitan University, later completing a PhD in English Literature at the University of Glasgow. Miller, both a poet and novelist, has also edited anthologies and specialises in Caribbean literature. He currently teaches Creative Writing at Royal Holloway University. In 2014 he won the Forward Best Collection Prize and is one of PBS’s 20 Next Generation Poets.

NIALL CAMPBELL
is a Scottish poet originally from South Uist in the Western Isles. He received an Eric Gregory Award and a Robert Louis Stevenson Fellowship, both in 2011. Moontide, his first collection (Bloodaxe, 2014) was the inaugural winner of the Edwin Morgan Poetry Prize, and was also named as the Saltire First Book of the Year, both in 2014. Moontide shortlisted on both The Forward and The Aldeburgh prizes for Best First Collection, and was a Poetry Book Society Recommendation.

Opens with an introduction from Founder and Editor GERRY CAMBRIDGE.

GERRY CAMBRIDGE
is a poet, essayist, and the founder-editor of The Dark Horse. His most recent book of poems, Notes for Lighting a Fire (HappenStance Press, 2012) was shortlisted in the poetry section for the Scottish Book of the Year Award 2013. Also known as a typesetter & designer, his The Printed Snow: On Typesetting Poetry, is forthcoming from HappenStance Press.

Merchandise (old and new) available on the night.