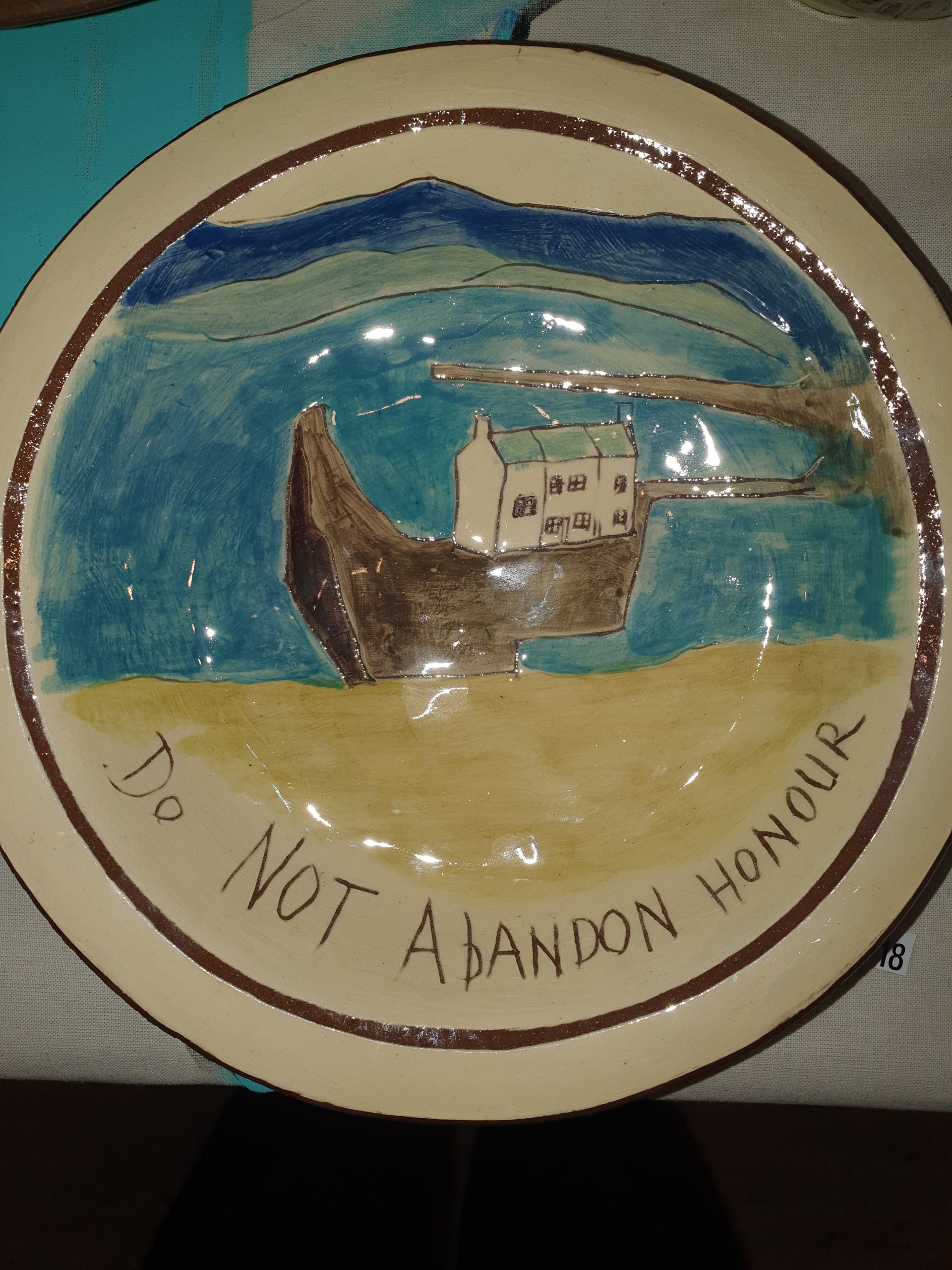 As of 7/5/22 we have sold 102 pieces, each one bought by a person who will uphold the memory of that woman’s name. Each buyer has taken part in this installation with that agreement and are therefore part of the art performance. There may well be a few pieces left for sale in May after  it has returned from Devon. In which case these will be on display and available to buy on the night.  If not it is still an opportunity to meet your fellow @147WDP participants. 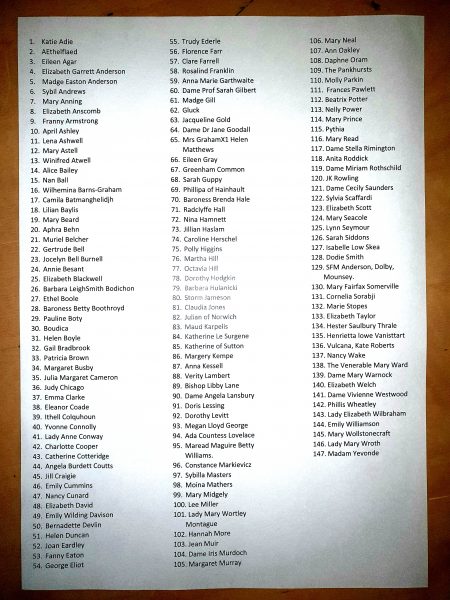 147womendinnerparty is an installation about women who should be better remembered, for how they have been instrumental in making and changing  Britain . Each of the 147 pieces (plates candlesticks bowls mugs vases bowls etc) is dedicated to one of these great women ; there are of course  millions of others who’s names we don’t know.

Each one off piece, hand made hand painted, is for sale and comes with a book with all the biogs, pics and full commemoration. Listen to more  https://open.spotify.com/episode/61LRKHPgwe2Ih7D5ZnYROj?si=PtCNLuTlT0GqclkrfXz4xg 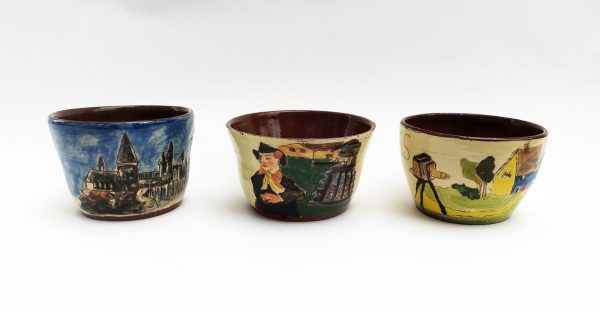 @147WomenDinnerParty – An exhibition that came from lockdown 202O

I had a revelation whilst at The Temple of Apollo, Delphi, Greece where the High Priestess – Pythia foresaw and proclaimed. Why has nobody heard of Pythia? Pythia held the most powerful position of any woman in the Ancient World, wrote 147 Maxims for humans to abide by, carved into the stones around the temple. Some of these have been adopted by every religion, most have been ascribed to Socrates or Plato or other male philosophers, after Pythia. Why?

I collect Motto Ware, this pottery comes originally from Devon where the terracotta clay was plentiful and was made by local  potters, from the beginnings of tourism around 1860 for 100 years.  Many women potters hand painted them with cottages and made thousands of these pieces inscribed with common place maxims, ‘Its better to wear out than Rust out’ but not their names. 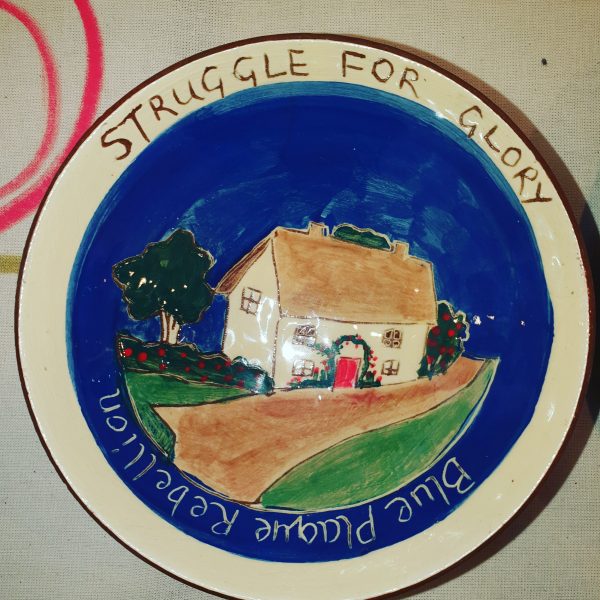 The cottage is a peculiar symbol of Britishness but does it represent us now post Brexit, or even then? Like cottages history has whitewashed women and their amazing  achievements, in retrospect the men are left standing. In 2020 14% Blue Plaques were for women  since 1866,English Heritage have thought worthy,  900 in existence roughly, the rest are to men. 147 Maxims, 147  Women of Britain who should be better remembered, who were celebrated in their day. With time on my hands during the pandemic I thought this was the moment to find a ceramicist interested in making and decorating 147 pieces! I found Mandee Gage to collaborate with. Mandee has hand made each piece original and different, (just like women). I have decorated half of them; all of them are dedicated to the women named on their bases. Mandee and I are stamped into each piece too. Women And Men, have made this country. This is what it means to be British. 147 Women became Dinner Party because we saw the installation laid out like a dinner table, traditionally a woman’s work, and to Commemorate Judy Chicago’s  piece, The Dinner Party, which has 39 guests with elaborate embroidered place settings that took scores of women to make. Mandee and I alone have done everything, including the book that accompanies the exhibition with potted bios, an image and of course each individual dedicated piece. 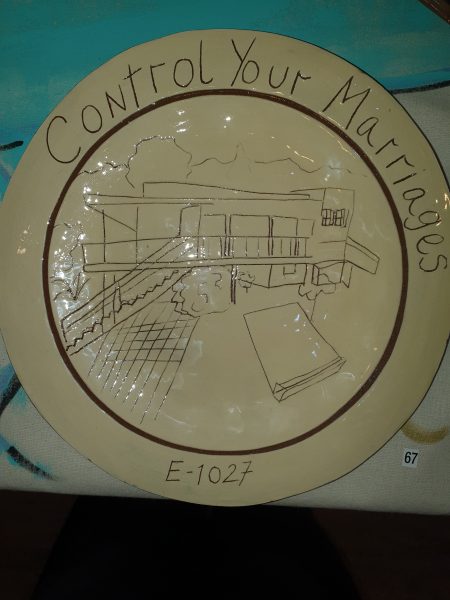 Below Sophie and Mandee at The Beecroft Gallery Southend. 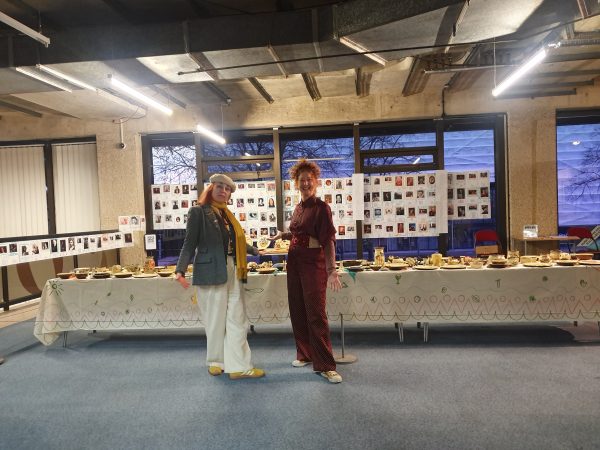 Sophie Parkin is an artist, writer, mother, broadcaster, journalist and businesswoman, co-owner of Vout-O-Reenees and The Stash Gallery. She has had 9 books published incl ‘The Colony Room Club; a history of Soho’, 4 one women shows and  co-presenter/ producer of podcast @ShadowSpies.

Mandee Gage is a mixed media artist, teacher and ceramicist whose work refers to human rights, the environment and societies engagement with it. Gage ran Hybrid Art and Science group for 10 years. She has shown extensively in the UK and Internationally from Oaxaca in Mexico, to the Venice Biennale.

Below – urns to Emily Williamson, RSPB – £175. Moina Mathers, The Order of The Golden Dawn- sold. 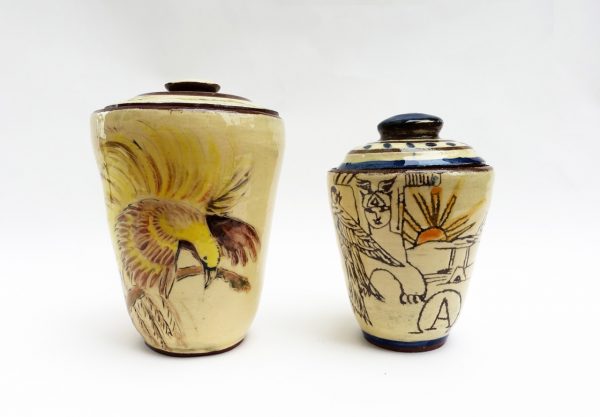