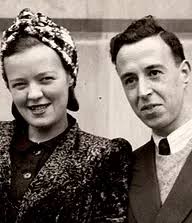 The Telegraphs Obit for

JOHN MURRAY, who has died aged 92, made a dramatic departure from wartime Russia with his wife, Nora, a spy recruited to seduce him.

Nora Murray became the first Soviet war bride to come to Britain; she recounted her experiences in a best-selling book, I Spied for Stalin (1950).

John Murray was born John Varocopolos at Blackpool on January 7 1908, the son of a Greek father and Irish mother. When he was 12, the family moved to London.

In 1925, he boarded a cargo boat for Latvia, where his parents had moved to work for a tobacco company. He adopted his mother’s maiden name and in 1934 became the owner of a tobacco factory in Riga, employing more than 300. At the same time he helped the Latvian government buy arms from munitions suppliers in Britain. When his factory was nationalised in 1937, he moved to Finland to barter in timber and textiles.

On the outbreak of war, Murray was instructed to report immediately to the British military attache in Helsinki. “I don’t think we’ll send you home, Murray,” he was told. “You’ll be a lot more use this side of the world.”

The Soviet secret police, it transpired, had been gathering intelligence on him for years, alerted by his activities in the arms trade. They accused him of being a spy, but, although he feared for his parents’ safety, he continued to resist their attempts to turn him. These culminated in the threat: “We will kill you when we are ready.”

For weeks Murray lay awake at night, his pistol pointing at the door, a torch at the ready to blind any assailant.

After four months of this, the Russians decided to try another way of getting through to him. They allowed him to travel to Moscow, where he joined the staff of Sir Stafford Cripps, the British Ambassador.

At an embassy party, Murray met the 21-year-old Nora Korzhenko, a beautiful girl recruited by the Soviet secret police to seduce Murray and extract information from him.

The embassy, though, began to suspect that she was a security risk and in 1942 dispatched Murray to England via Archangel. Nora followed with forged papers. At the quayside in Archangel she was told that her lover’s ship had sailed but had run aground 30 miles up the coast; she trudged through the snow until she found him.

After a personal plea to Stalin, they were given permission to marry before leaving the country aboard the Empire Stevenson. The rest of the convoy was sunk by U-boats. After changing ships in Reykjavik, they learned that the Empire Stevenson had suffered the same fate.

On their arrival in London, Murray served in the Army until demobilisation in 1946. His wife, meanwhile, had to fend for herself in a tiny flat in Camden. Nothing daunted, she taught herself English and set about writing her memoirs, which were published in 1950 as I Spied for Stalin .

The Murrays lived for many years in a prefab in north London. The design delighted Mrs Murray. Prefabs, she said, were “the most wonderful idea English architects have ever had”.

In other ways Britain fell short of her hopes. She was disappointed, for example, by the over-abundance of pubs and the dearth of good schools. She was horrified to find that she could not afford to send her sons to Eton: “I do not accept this viewpoint, and nor will any Soviet bride.”

After the war, Murray set up a printing business, but it failed. He was forced to work night shifts in an ice cream factory while he looked for a better job. He eventually found permanent employment as a clerk at London Zoo.

Mrs Murray meanwhile became something of a celebrity following the publication of her book, and was much in demand for interviews. One reporter described her as “a combination of Bessie Bunter, a St Bernard dog and a Russian Peggotty”.

The Murrays’ marriage began to falter. Mrs Murray felt that her husband “fell far short” of her intellectual standards. John Murray acknowledged this, observing: “She is very clever. She spends hours writing reams of poetry and essays with titles like ‘The meaning and purpose of life’ “. They separated in 1956.

Nora Murray went on to write two more books, and cut a colourful figure in the dreary streets of north London as the so-called “Russian Queen of St Pancras” where she lived.

In 1978 John Murray published his own autobiography A Spy Called Swallow . (Swallow had been his wife’s codename.)

His second marriage did not last. In 1989 he was reconciled with his first wife after learning that she was suffering from cancer. He was alone at her bedside when she died later that year. John and Nora Murray had three sons.