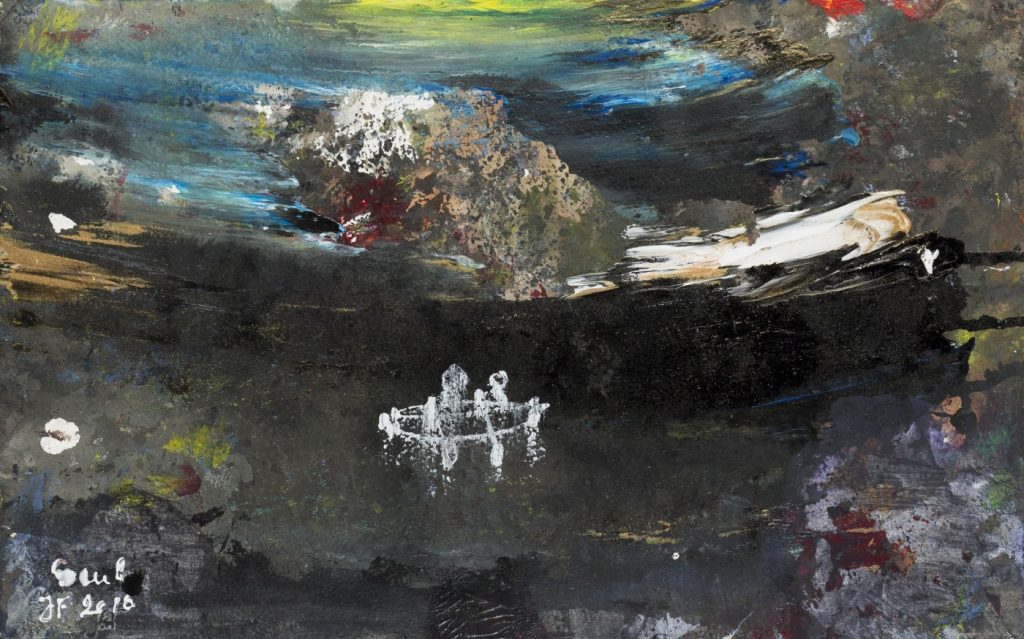 This spring sees the long-awaited UK showing of Belgian artist Julien Friedler. Consisting of 40 works on paper, it is the first significant outing for the Belgian artist in the country and an introduction to Friedler‚Äôs intriguing body of work.

Well-known across Europe and the US, Friedler‚Äôs work defies the surface activity found in much contemporary art. His works ‚Äì which include paintings, drawings, writings as well as events ‚Äì are informed by mythology: of spirits and mystical entities like angels and demons within ethereal universes. Both contemplative and exuberant, they are replete with tensions between space and solidity. They reward slow reflection.

An ex-psychoanalyst ‚Äì and a long-time pupil of Jacques Lacan ‚Äì Friedler has long studied mythology and anthropology, and brings these ideas to his work. He has a worldwide association called the Spirit of Boz, which aims to establish exchanges and links with a global community. Inaugurated in 2006, the Tour of Boz is to operate for 80 years, bringing the Spirit of Boz to the world. It is in the tradition of culture exchanges of Robert Rauschenberg and Fluxus ‚Äì using the power of art as a catalyst for globlal interaction ‚Äì and now updated as a source of communion in the internet age.

Sometimes compared to the Belgian artist James Ensor, Friedler‚Äôs paintings combines aspects of the grotesque and carnivalesque with a dramatic use of colour.

Friedler‚Äôs work, seen at many exhibitions including 2018‚Äôs Outsider Art fair in Paris, offers a sense of transcendence that is now unusual in the contemporary art sphere. He believes that art is a human activity that expresses universal concerns, beliefs and emotions ‚Äì and Friedler is a believer in Joseph Beuys‚Äô dictum that ‚ÄúEvery one of us is capable of doing creative or artistic work‚Äù. Like Beuys, Friedler believes that art can be a philosophical, moral and even existential programme: using the power of the subconscious to awaken the spirits of the age.

‚ÄúArt is not entertainment. It is more a power that is self-generating ‚Äì a mystery that we need to probe.‚Äù
Julien Friedler

2010
Spirit of Boz, the Truth of the Labyrinth, CW Gallery, New York