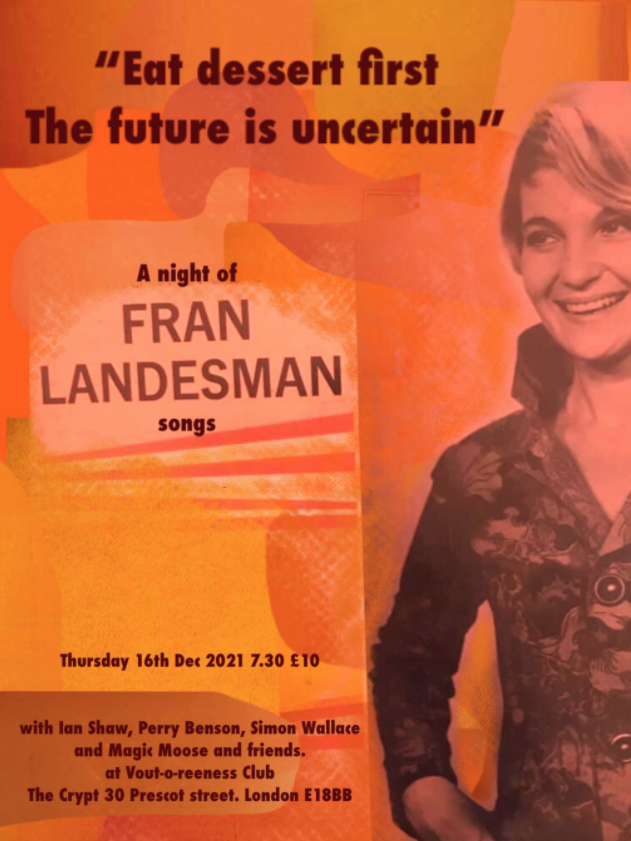 Fran Landesman was an extraordinary songwriter and poet.  Unforgettable, Ballad of the sad young men, Spring can really hang you up the most, Scars, small day tomorrow. Writing some all time jazz classics made more famous by Ella Fitzgerald, frank Sinatra, Julie London, Betty Carter , barbara Striesand, Bette Midler etc-its 10 years since she died and as commemoration Miles, her son has bought together an amazing collection of top jazz singers for a charity performance. Ian Shaw, Simon Wallace, Sarah Moule, Josephine White, Perry Benson, and Miles Landesman with special guests.

Early bird tickets and members only £5 from December £10 . Monies will go to the young peoples musical charity that works with immigrant children travelling alone

And here is a delicious taster Ian Shaw’s album of Landesman https://open.spotify.com/playlist/6Doh2bD11kLQIVTlVTZ5bv?si=b99468249a48493e 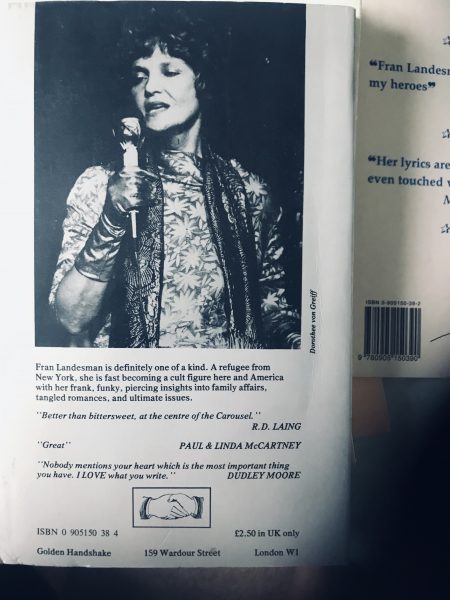 Fran Landesman was born in New York in 1927, and began writing lyrics in the 1950’s
Fran was a part of the Jack Kerouac  and Alan Ginsberg scene that later formed the basis for her lyrics to the beat musical on  broadway   The Nervous Set (1959) out of that musical came her most  famous song “The Ballad of the Sad Young Men” Together with “Spring Can  Really Hang You the Most,” her  lyrics have been enjoyed by millions  though recordings  by Ella Fitzgerald, Barbra Streisand,Roberta Flack, Shirley Bassey and  Bette Midler and many more.in 1964 she moved to London where she continued to write songs collaborators on both sides  of the atlantic, including
Bob Dorough (three is the magic number) Georgie Fame,Dudley Moore.
she met composer Simone Wallace, establishing a partnership that has  produced a catalog of more than 300 songs. Theatre shows  based on their work have been produced in London,Bath ,Edinburg,New York.
Fran Landesman occupies the ironic territory between Dorothy Parker and Cole porter 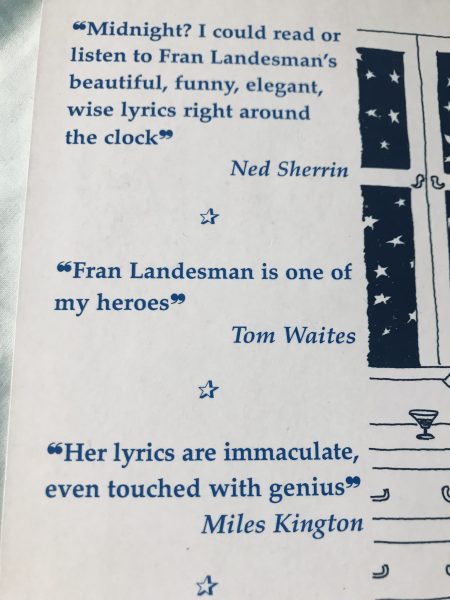